What World’s smallest primate can teach us about the origins of our visual systems?

“A picture is worth a 1000 words”. This saying emphasizes how strongly we humans rely on vision in our daily lives. The brain circuits processing visual information have been studied in great detail since over a century and these studies revealed that individual “pixels” are processed in small computational units in the brains of primates.

Since different primate species span a wide range of sizes, one can ask if this basic computational unit scales with body size and is simplified or miniaturized for example in the World’s smallest primate, the 60 gram mouse lemur (Microcebus murinus)?

In a collaborative effort (University of Geneva, Max Planck Institute in Göttingen, Museum of Natural History in Paris) we have compared the visual circuits in the brains of different primate species and revealed a surprising finding: This basic processing unit representing a single pixel is of almost identical size in the tiny mouse lemur (70gr), the medium-sized macaque (7kg) or larger primates (including humans). The researchers also found the actual number of neurons per unit as well as its functional organization is almost same across all primate species studied so far. 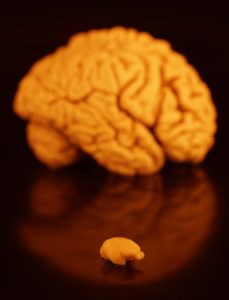 What do these results teach us about the origins of primate vision? First, the finding that this unit is so well conserved across multiple primates species suggests it has probably evolved very early in primate evolution. It also means that the visual circuits of our primates ancestors probably had similar designs and hence similar visual capacities. Second, the finding that this part of the visual system can not be scaled or compressed, means that it probably needs a fixed number of neurons to function properly. For tiny primate species with excellent vision such as the mouse lemur, this predicts that the areas related to vision must be relatively large to accommodate a sufficient number of pixel processing units. Indeed the researchers at the University of Geneva found that a fifth of the cerebral cortex of the mouse lemur is dedicated to visual processing. This probably also represents the evolutionary ancestral state. In the large brains of humans, these circuits take up barely 3%.

Finally, this study also highlights the utmost importance of conserving the habitat of primates species such as the mouse lemur, particularly in the forests of Madagascar. These habitats are disappearing at an alarming rate, and with them disappear many endemic species which might have provided important keys toward a better understanding of our own origins.